Good design is hard to capture, but this document will talk about some of the considerations.

One important note is that BELs represent a placable location for a cell, and only one cell should be placable at a given BEL. This means that the cell library design and BEL design strongly affects what is expressable by the place and route tool. There will be some examples highlighted below that expand on how this is important and relevant when discussing concrete examples.

Granularity of the cell library¶

It is important to divide the place and route problem and the synthesis problem, at least as defined for the purpose of the FPGA interchange. The synthesis tool operates on the cell library, which should be designed to expose logic elements at a useful level of granularity.

Cell definitions should be granular enough that the synthesis can map to them, but not so granular that the place and route tool will be making few if any choices. If there is only one legal placement of the cell, it’s value is relatively low.

When designing an FPGA interchange device resource for a new fabric, one important consideration is where to draw the site boundary. The primary goal of lumping BELs within a site is to capture some local congestion due to fanout limitations. Interior static routing muxes and output muxes may accommodate significantly fewer signals than the possible number of BELs that drive them. In this case, it is important to draw the site boundary large enough to capture these cases so as to enable the local congestion to be resolved during either packing for clustered approaches, or during placement during unclustered approaches. In either case, local congestion that is strongly placement dependant must be resolved prior to general routing, unless a fused placement and routing algorithm is used.

A common case worth exploring is FF control sets, e.g. SR type signals and CE type signals. In most fabric SLICE types, the SR and CE control signals are shared among multiple rows of the SLICE. This is a common example of local site congestion, and the site boundary should typically encompass all BELs that share this kind of local routing for all the reasons discussed above.

Another consideration with control signals is the presence of control signal constraints that cannot be expressed as local routing congestion. For example, if a set of BELs share whether the SR control line is a set or reset (or async set or async reset), it is common to expand the site boundary to cover the BELs that share these implicit configurations. The constraint system in the device resources is designed to handle this kind of non-routing driven configuration.

BEL definitions require creating a boundary around primitive elements of the fabric. The choice of where to place that boundary has a strong influence on the design of the cell library in the FPGA interchange.

The most common case where the static routing muxes are typically lumped into the BEL is BRAM’s and FIFO’s address and routing configuration. At synthesis time, a choice is made about the address and data widths, which are encoded as parameters on the cell. The place and route tool does not typically make meaningful choices on the configuration of those static routing muxes, but they do exist in the hardware.

In some cases this can be handled through tight coupling of the cell and BEL library. The idea is to limit cell port to BEL pin mappings that avoid illegal static routing mux configurations. This approach has its limits. In general, considering how the bitstream expresses static routing muxes must be accounted for when drawing BEL boundaries. 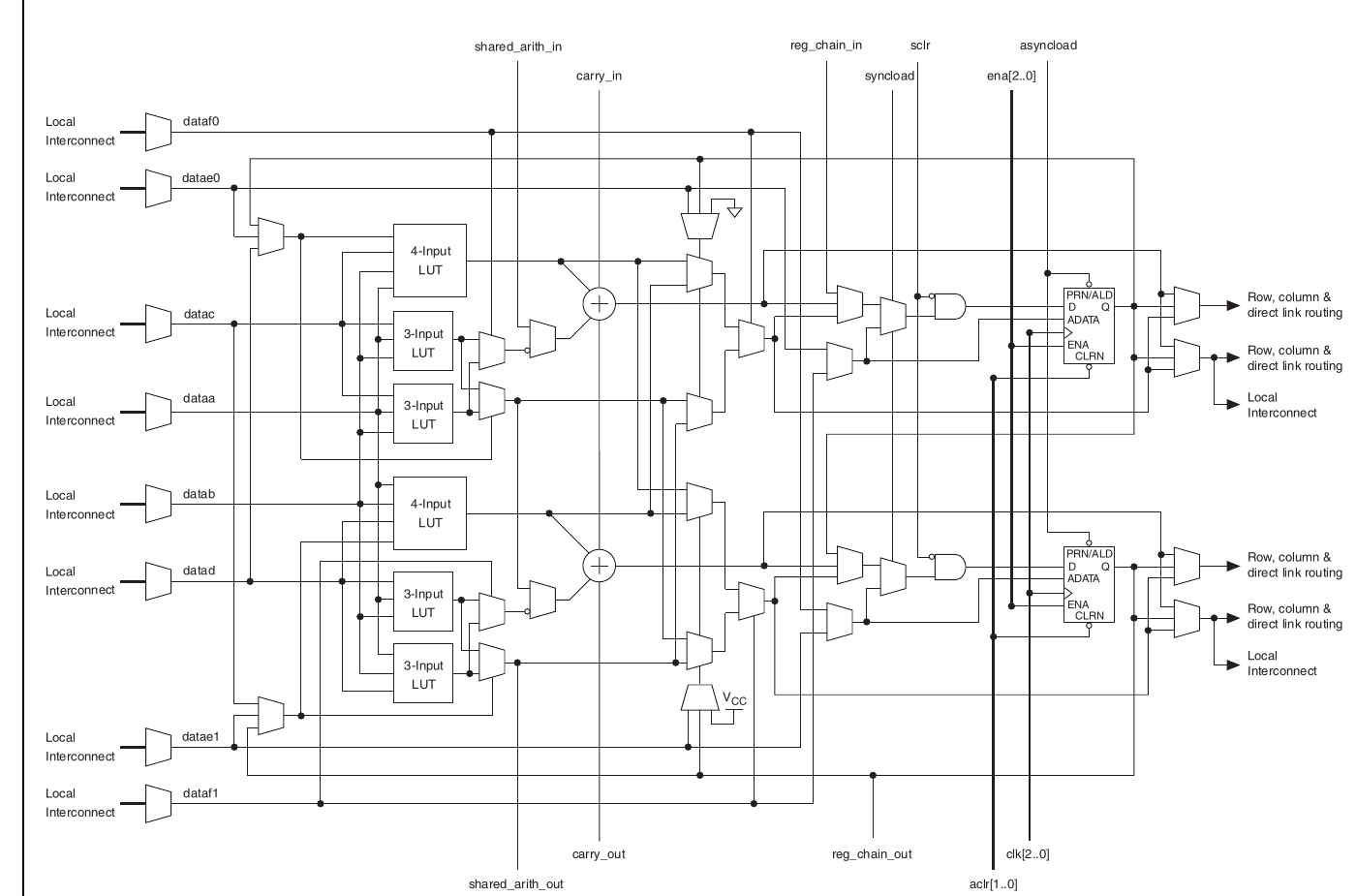 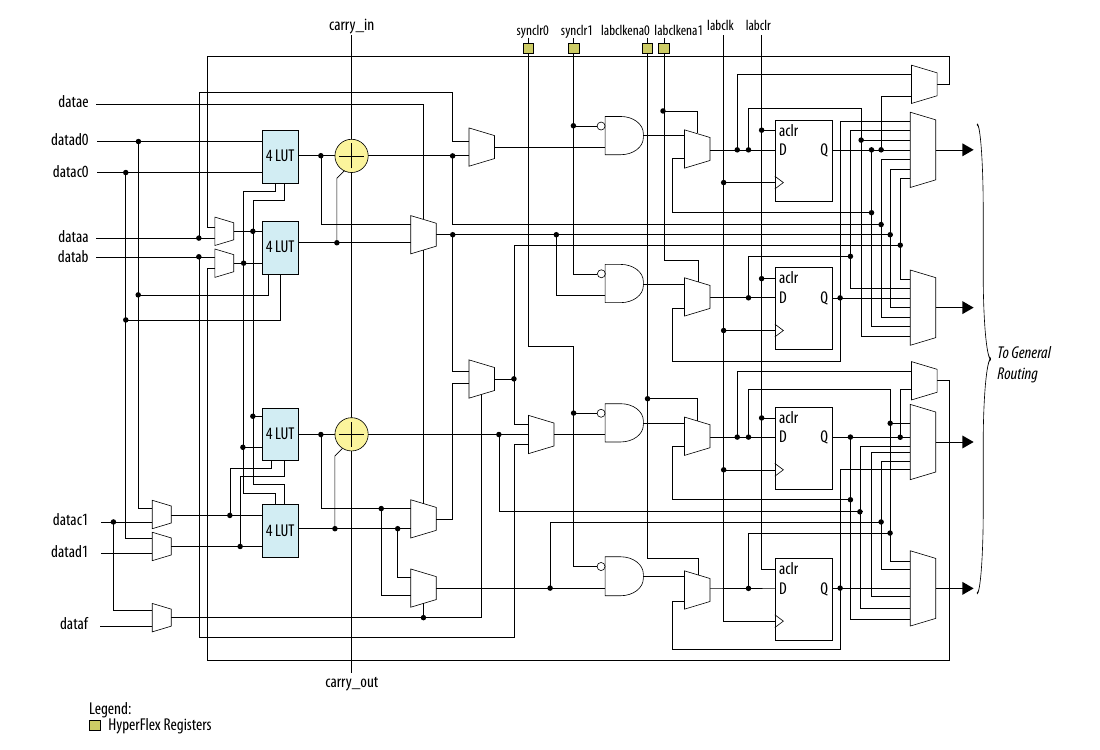 Consider both Stratix II and Stratix 10 logic sites. The first thing to note is that the architectures at this level are actually mostly the same. Though it isn’t immediately apparent, both designs are structured around 4 4-LUT elements.

Take note that of the following structure:

This is actually just two LUT4 elements, where the top select line is independent.

In Stratix 10, the LUT4 element is still present, but the top select line fracturing was removed.

So now consider the output paths from the the 4 LUT4 elements in the Stratix II site. Some of the LUT4 outputs route directly to the carry element, so it will be important for the place and route tool be able to place a LUT4 or smaller to access that direct connection. But if the output is not used in the carry element, then it can only be accessed in Stratix II via the MUXF5 (blue below) and MUXF6 (red below) elements. 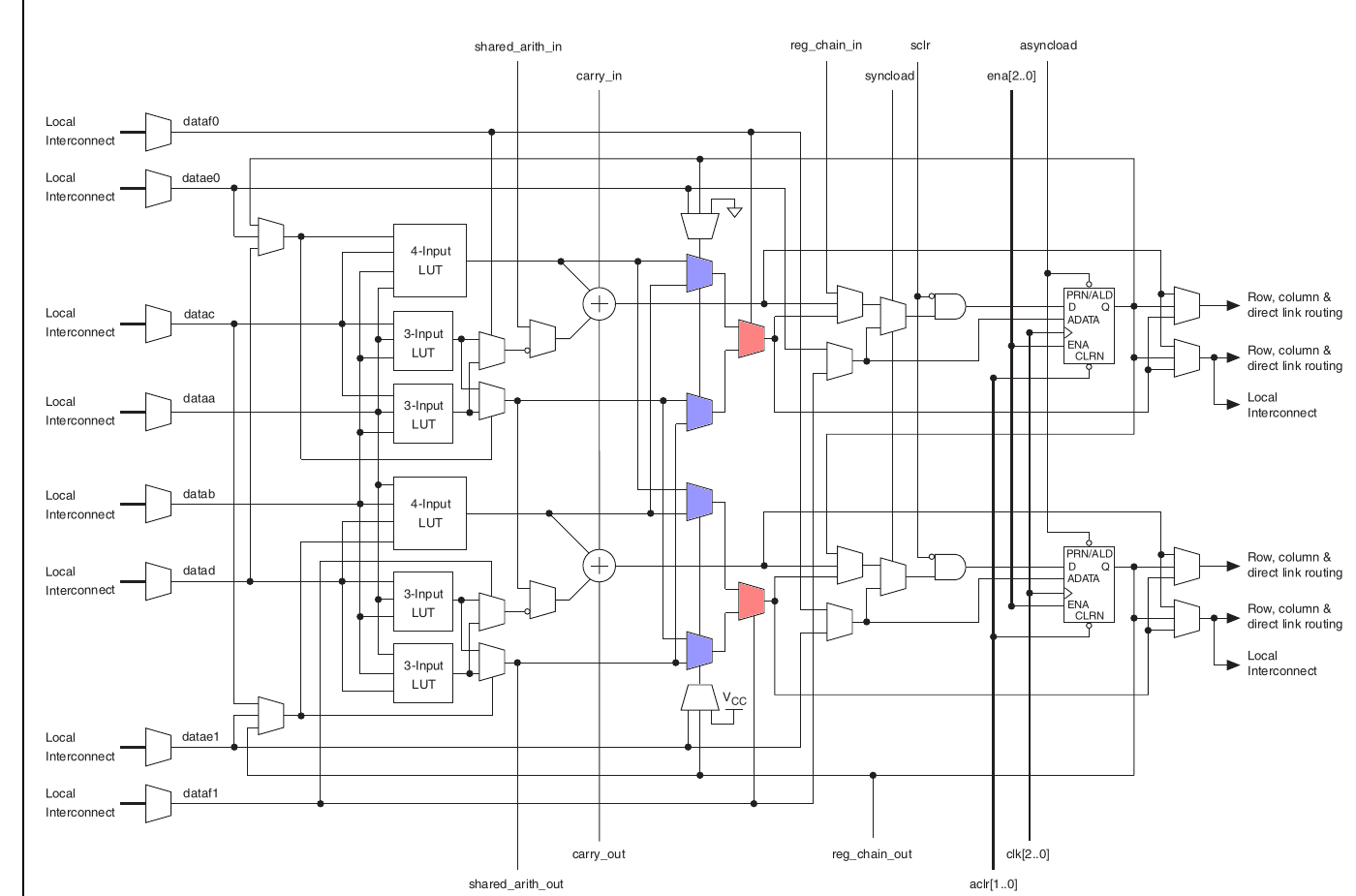 So given the Stratix II site layout, the following BELs will be required:

The two LUT6 BELs are shown below: 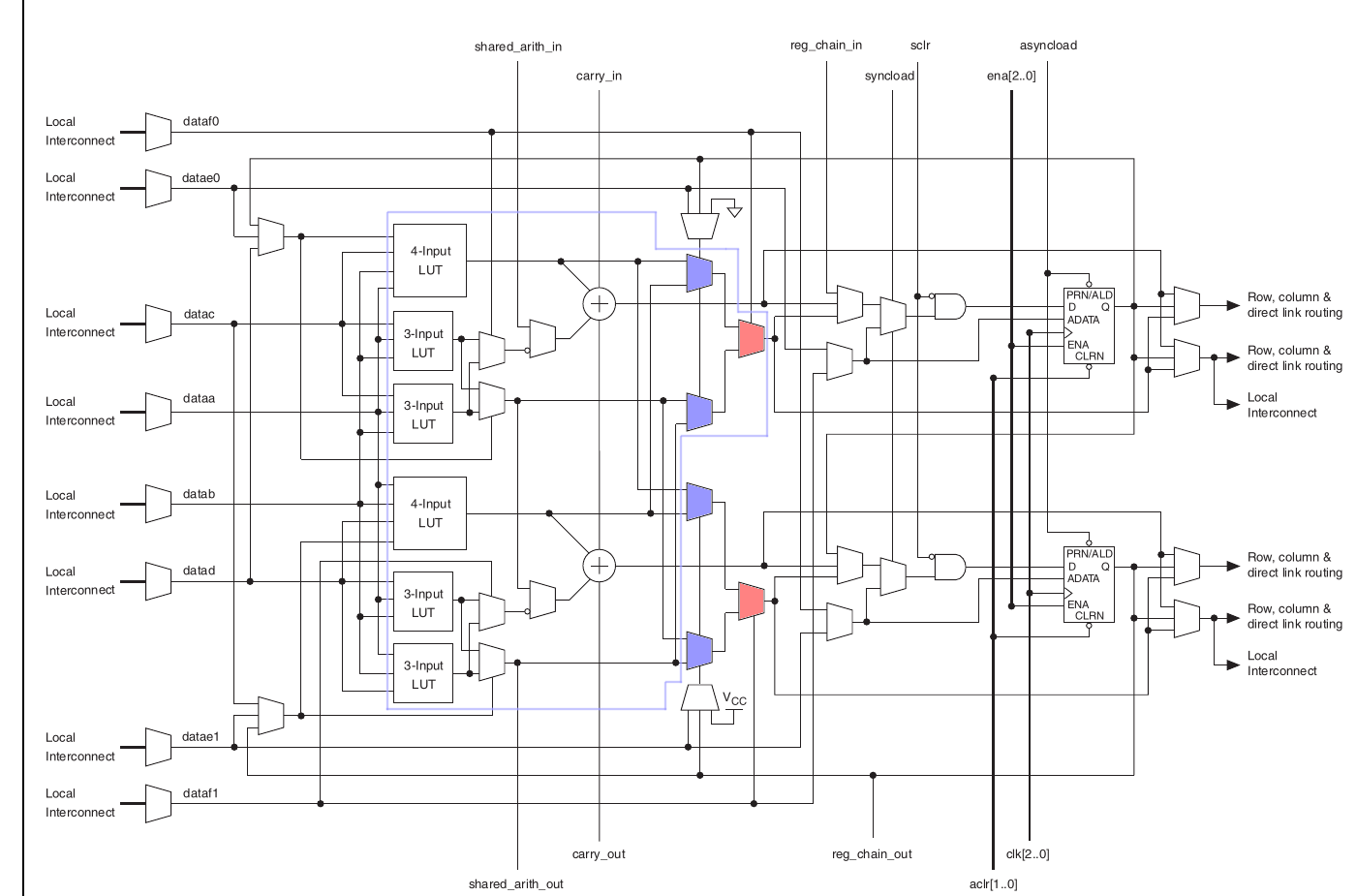 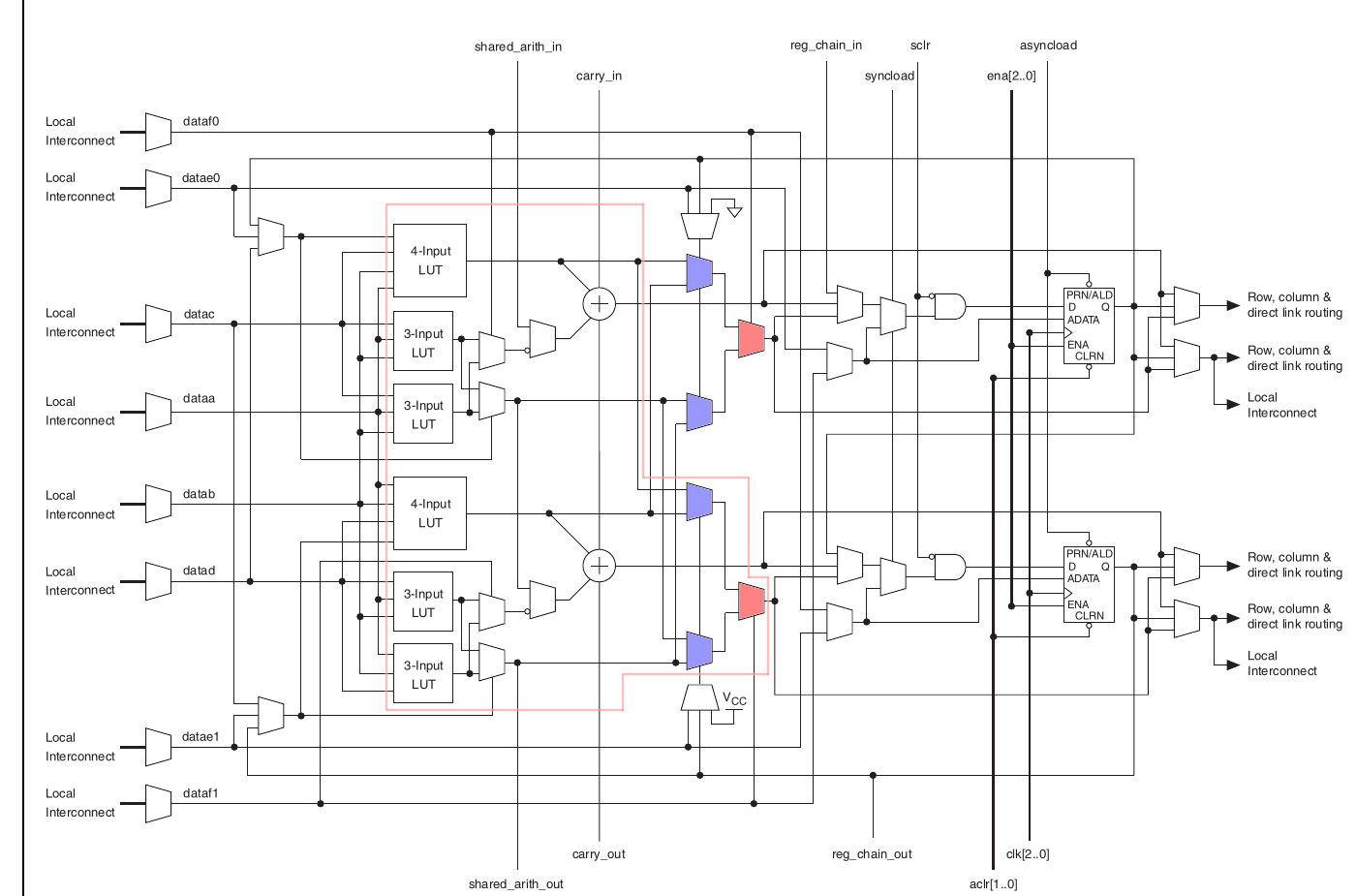 Drawing a smaller BEL boundary has little value, because a LUT5 element would still always require routing through the MUXF6 element. 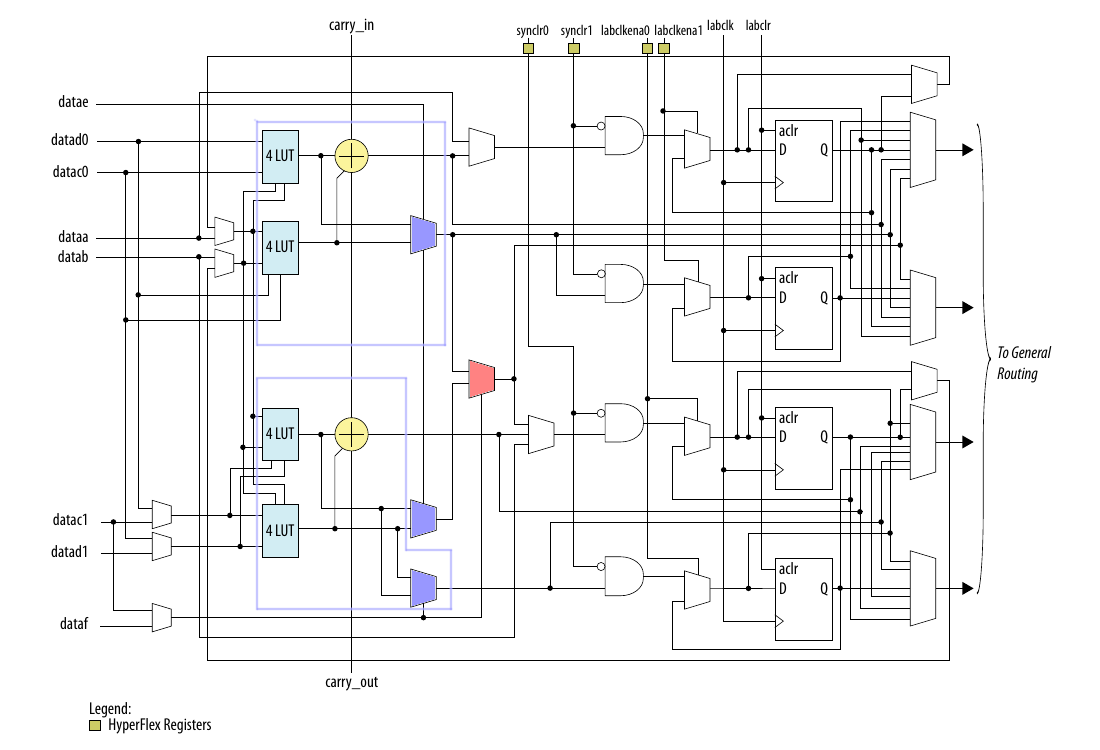 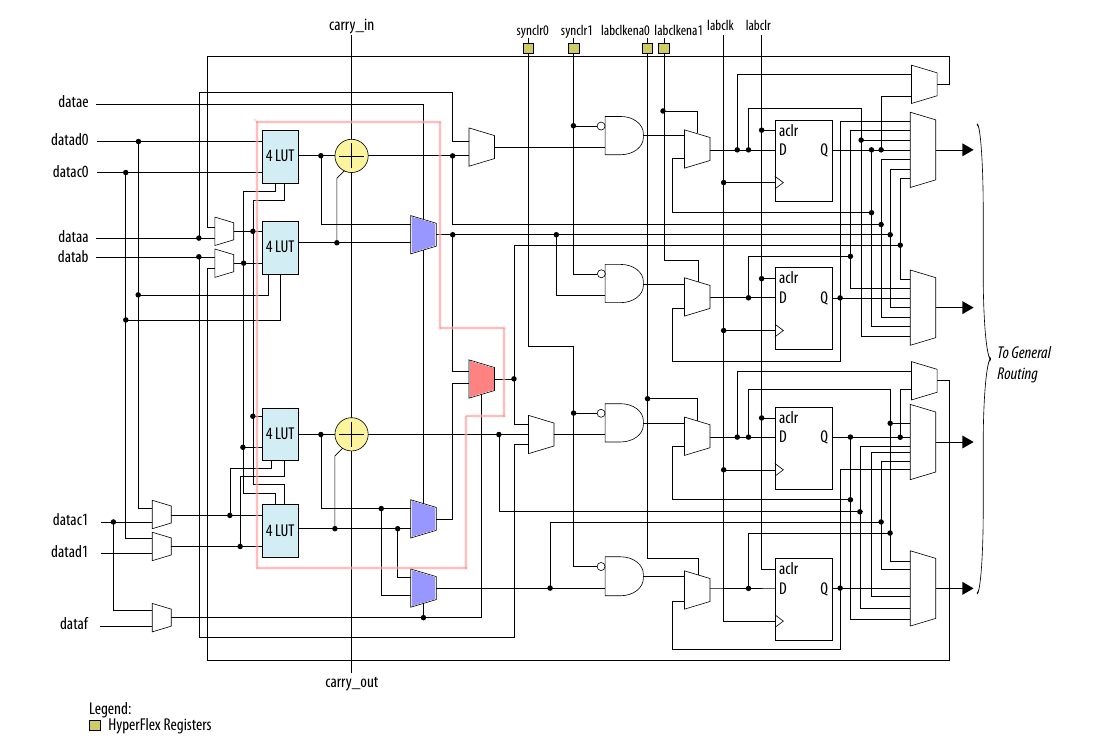 So given the Stratix 10 site layout, the following BELs will be required:

The Versal ACAP LUT structure is fairly similiar to the Stratix 10 combitorial elements. 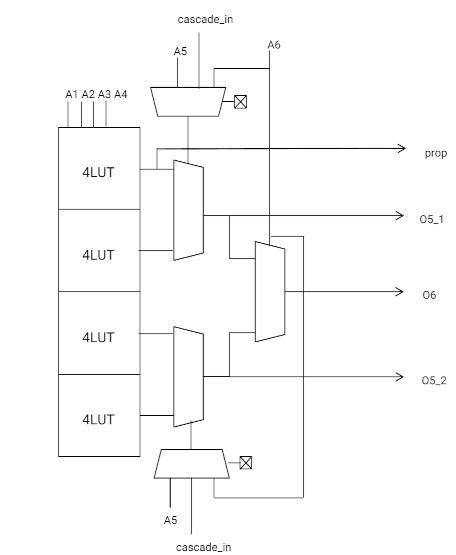 Unlike the Stratix 10 ALM, it appears only 1 of the LUT4’s connects to the carry element (the prop signal). The O6 output also has a dedicate connection to the carry. See image below:

The Versal LUT structure likely should be decomposed into 4 BELs, shown in the next figures: 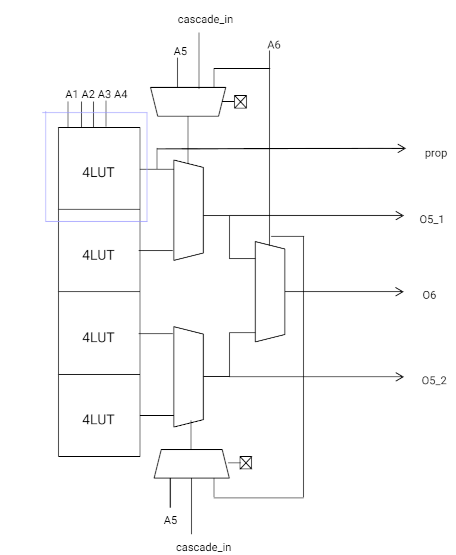 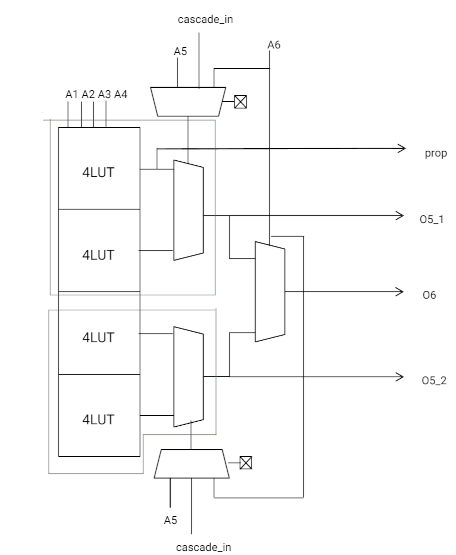 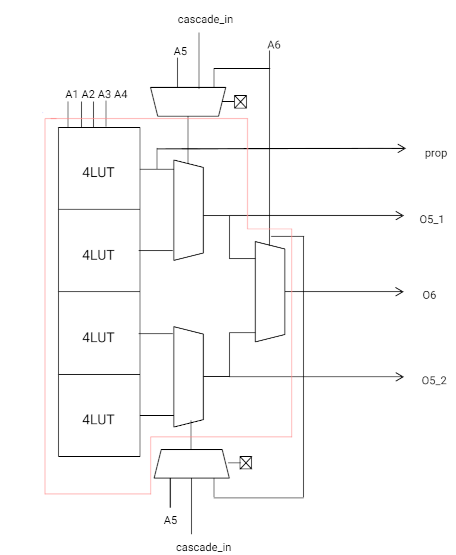 So given the Versal site layout, the following BELs will be required (per SLICE row):

Implication of a wider BEL definition¶

The Quicklogic EOS S3 logic cell has an interesting LUT design because there is not LUT element specifically. Instead, the fabric exposes a 8x3 mux, with inverters at each of the mux inputs, see figure below: 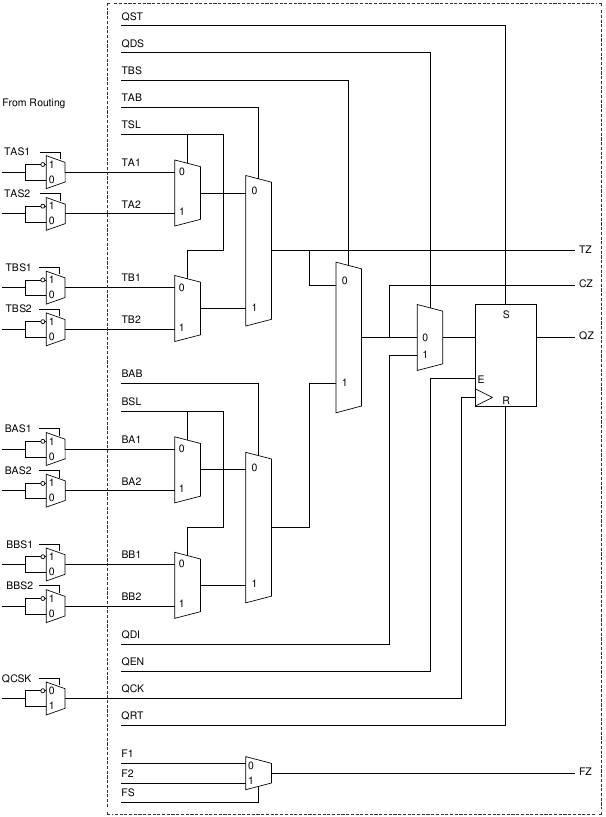 The way to approach this fabric is to first draw BEL boundaries around the 4x2 mux and 8x3 mux present in the fabric: 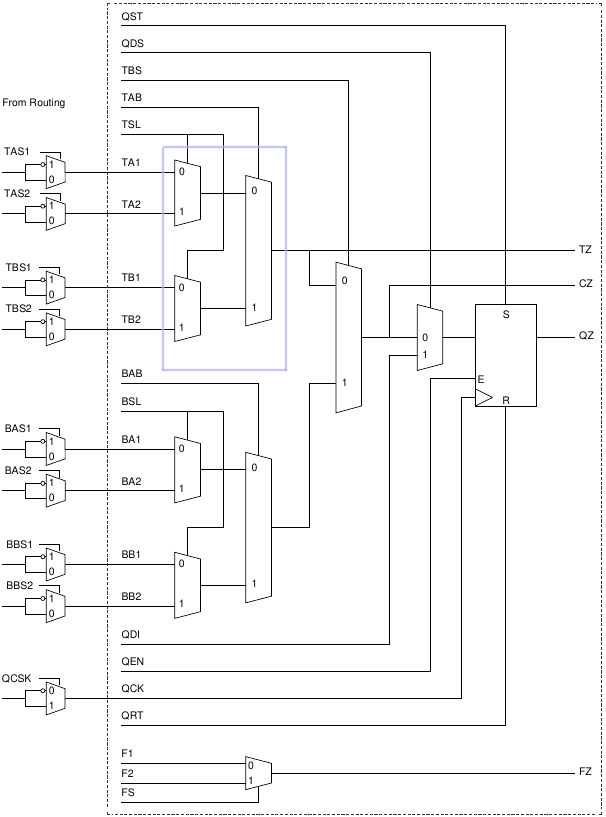 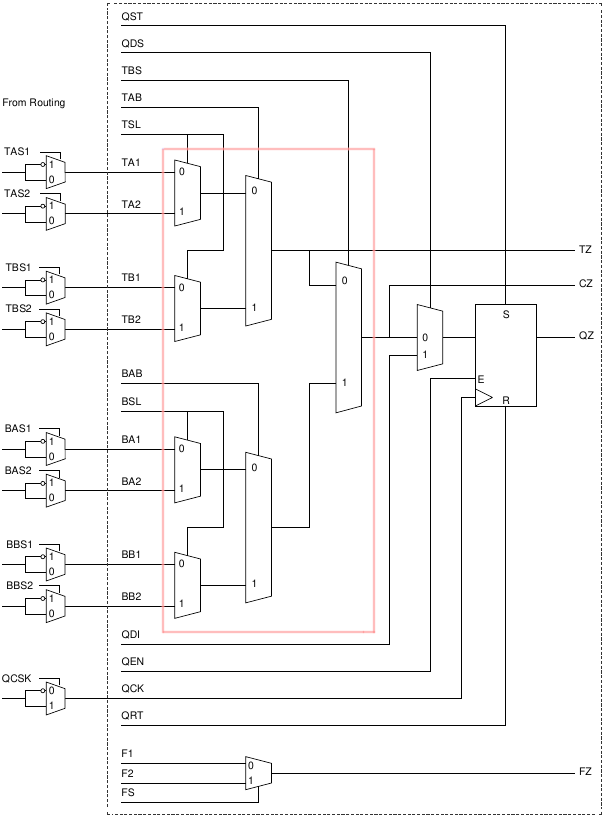 The cell library should have 3 MUX cell types:

A fourth most general cell type is possible, which is to add a cell that also has a cell port that maps to TBS, instead of tying TBS high as the 2xMUX4x2 cell would do. It is unclear how useful such a cell would be. However given the BEL boundaries, adding such a cell would be easy after the fact.

In all of the cells above, all inputs to the muxes have statically configured inverters.

The solution is when mapping a LUT cell, to tie all of the MUX BEL pins to VCC (or GND, whatever the default is) before the inverter. The place and route tool can treat the BEL as a regular LUT, and only the bitstream generation step will need to be aware that the inversion control is being used to encode the LUT equation.

This configuration allows most (if not all) of the logic to be available to the place and route tool, without exposing unneeded complexity.